Life Cycle Of A Spider 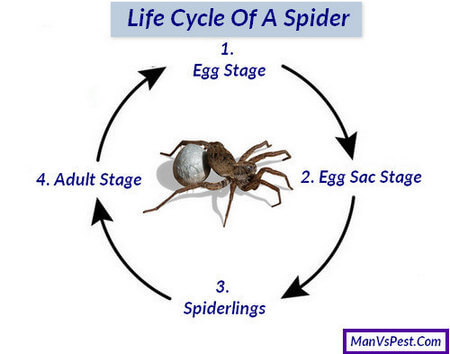 Spiders are arthropods of the class Arachnida and order Aranea. They have four pairs of legs and their bodies are divided into cephalothorax and abdomen. From the tiniest to the largest spiders, they share the same life cycle and it is divided into four stages. These are egg stage, egg sac stage, spiderlings and finally adult stage. There are several species of spiders and as for courtship and mating rituals, they vary depending with the species. Spider species.Spiders are found worldwide, both in the wild as well as in our houses.

Spiders mate during spring time and early summer. They reproduce sexually through internal fertilization however, since the male does not have external sex organs, he releases them either into a sperm web or into the female spider’s reproductive opening (epigyne). Before mating, there are rituals that take place to determine whether or not the process will occur or not. This includes knowing whether the female spider is of the same species as the male and whether she is ready for mating.Spider mating rituals. After mating, most female spiders eat the opposite sex before departing to a place where she will fertilize the eggs.

Life Cycle Of A Spider

The female spider lays thousands of eggs in one or more egg sacs made of silk and uses the stored semen to fertilize them one by one. She then carries the sac on her spinnerets or attaches it to a plant or hides it to protect the eggs from predators. The spiderlings go through all the larval stages when inside the sacs and it takes a few weeks for them to hatch. When they have hatched, tiny spiderlings come to life and they live on their own from that point but it depends with the spider species.

The spiderlings are a spitting image of their adult self when they hatch just smaller in size. They disperse through walking away or ballooning which involves producing strands of silk. Sometimes the female spiders die after the laying eggs or when the spiderlings have hatched but in case of survival, she feeds and looks after her babies. Spiders are carnivores thus feed on other animals and for hunting they use webs as traps to catch their prey.

Spiderlings grow through molting process before they fully become adults. Generally, they have to go through at least 5-10 molts before reaching adulthood. When they reach adulthood, the cycle starts all over again with the offspring’s now mating and reproducing.Molting process and benefits.

You may need this How to control spiders .

The average lifespan of a spider living in the wild is about three years. However, in captivity the spiders could live longer for more than 20 years. The overall life cycle of a spider is different based on the species. Female spiders tend to live longer compared to male spiders since they often die after mating or are eaten by the she-spider. As for female spiders, they pass away either after laying eggs or after the spiderlings have hatched.