Life Cycle Of A Bedbug 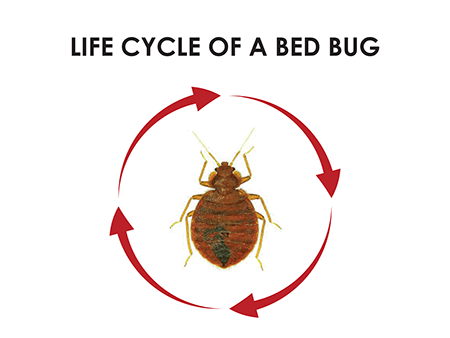 Bed bugs are insects which depend on blood for survival and they belong to the Cimicidae family. Like the name suggests, they infest near sleeping areas or inside beds and on bedding. The bedbug is a blood sucking parasite which feeds on the host without getting noticed. However, it leaves behind bites which are characterized by an itchy rash on the skin but this depends with the person’s reaction towards the creature. Before taking steps to exterminate bedbugs from your home, it is important for you to know the Life Cycle of a Bedbug. Bedbug bites and the characteristics.

Life Cycle Of A Bedbug

According to Center for Invasive Species Research, University of California, Riverside

Human bed bugs were virtually eradicated from the developed world in the middle of the 20th century. However, as of the first decade of the 21st century, bed bugs are back and winning. Bed bug infestations have been reported from all over the US and Europe, and California is no exception. Together with bat bugs, swallow bugs, and poultry bugs, they belong to the family Cimicidae in the suborder Heteroptera or true bugs (order Hemiptera).

Cimicidae comprise less than 100 described species worldwide, but their notorious habits as temporary ectoparasites of birds and mammals, including humans, and the unusual mode of reproduction known as traumatic insemination, have made this small group of true bugs infamous. Recent interest in biology and ecology of bed bugs is now being reinforced by increasing numbers of household infestations on a global scale. 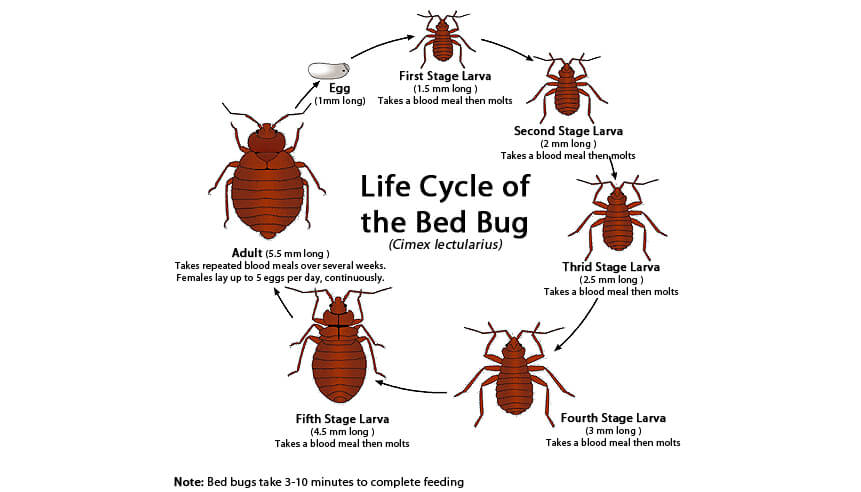 The life cycle of the bedbugs begins with the mating of the male and female species. They mate through a process known as traumatic insemination which involves the male piercing through the female’s abdomen injecting sperms into her hemocoel. The female lays eggs after having fed on blood which she lays about 1 to 7 on a daily basis.

In a lifetime, the female bedbug can lay up to 500 eggs or more as long as they constantly have a blood meal regularly and they do not have disruptions that would hinder them from laying the eggs and the right temperatures. The more the female hibernates to conducive habitats, the more they increase in number and the higher their infestation.

After mating, the female lays oval shaped white color eggs. Which are approximately 1mm long. The eggs are laid into cracks and crevices of mattresses and bed frames and takes about a week or two to hatch. After the eggs have hatched, the bedbugs nymph need to have a blood meal so that it can molt to the next nymph instar stage. Immature nymphs undergo gradual metamorphosis to graduate to adulthood have to undergo at least five molting stages which involves the shedding of their exoskeleton so that they can grow.

During the 1st instar nymph stage, the bedbug has grown to about 1.5mm in length. At this stage the bed bug is transparent and very difficult to be detect with human eyes. After taking a blood meal, it advances to 2nd instar nymph stage. It is approximately 0.5mm longer on 2nd instar nymph stage and continues to feed. It progresses to the 3rd, the 4th and finally to the 5th stage following the same way. In the final nymph stage, it is about 4.5mm long and develops a reddish brown color. The bedbug is quite visible to the human eye at this stage. It will take about days before the incomplete metamorphosis comes to a halt.

Feeding is very important. When it comes to the growth of a bed bug from hatching through the nymph stages to adulthood.  Also the female bedbug requires blood so that it can lay up eggs. Generally, if the bedbug nymphs feed well, it will take about a week before developing to the next stage. On the other hand, if bedbugs don’t feed, it does not necessarily mean they’ll die. Only thing that happens is that they do not graduate to the next nymph stage. Bed bugs feed for about three to ten days and afterwards they retire to the living hideouts. Depending on the amount of blood they had fed, they will stay there until the next feeding.

The average life span of a bed bug is between six to twelve months provided that it feeds accordingly. At the same time, the bed bug can survive without feeding for two to three months. The period in which the bed bug can survive depends on the stage of development. It is in as well as its feeding program. In addition to that, the environmental temperature will also affect the bed bugs life span.

Now you know how bedbugs grow and where they might have layed eggs out of you sight. Now you can truly Get Rid of Bedbugs without any possible chances of future infestations.