5 Gnat Types You Need to Know About 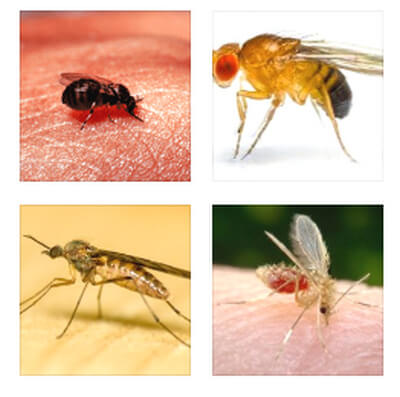 Gnats, though mostly known for being annoying, can also act as disease vectors.

But, did you know there are more than just two gnat types?

Again, you might ask what’s the point of knowing gnat types?

It is not only about knowledge, but knowledge for prevention. Gnats pose a health risk to humans and other animals by transmitting pathogens.

It won’t hurt you to know the enemy and prepare accordingly to fight against them. Would it?

So, let’s get started.

The Gnat Types: variations in gnats

Biting, non-biting; here are some of the most common types of gnats which you might find in your neighborhood:

Buffalo gnats are commonly known as black flies, belonging to the Simuliidae family. They are small measuring around 1/16 to ⅛ inch long with short legs and antennae. Black flies usually have black or gray bodies with bright yellow or orange patches.

While males feed on nectar, females feed on blood for laying eggs. They draw blood from humans and livestock which makes female buffalo gnats bitey. And they are not subtle about it. Gnat bites are painful as they tear the skin and inject an anticoagulant which reacts with our body’s defence mechanism. Besides pain, there’s the added risk of contracting diseases like river blindness from these gnat bites.

These gnat types are usually active in daylight, and prefer places with clean, running water and source of blood to assist their living and reproduction. The lifespan of a buffalo gnat ranges anywhere between two weeks to a few months.

Cecidomyiidae or gall gnats are a nuisance pest. Most commonly known as gall midges, these are similar in size to other gnat types at about 1/10th of an inch long. You can distinguish them by their short hairy wings and long antennae.

Gall gnats largely affect plants. The larvaes depend on plants and feed within plant tissues. This gnat activity results in abnormal tissue growth in plants known as gall. The galls which may take the shape of a ball, knob or lumps do not cause any serious damage to plants. That said, galls hugely affect the aesthetics of a plant; which could be a cause of concern for indoor decorative plants.

The lifespan of a gall gnat is around two days.

One would know sand gnats as sand flies or punkies. These gnat types are approximately ¼ inch long. Sand gnats are mostly golden, brown or gray in color. Besides, they also have hairy wings, similar to gall gnats. You can differentiate them from other gnats by their extremely long legs which are longer than its body. These long legs makes them look somewhat similar to mosquitoes who are their cousin.

Females are blood-sucker, biting humans and other animals to get the required protein to lay eggs. These bites can be a medium with the gnats, themselves, serving as a vector for diseases like leishmaniasis and pappataci fever. Moreover, they are a proven vector of the deadly Chandipura virus. Sand flies mostly active at dusk or night, biting and feeding for around five weeks.

Eye gnats are another type of nuisance gnats. These gnats have shiny black or gray bodies which are anywhere between 1/16 to ⅛ inch long. They are similar to buffalo gnats in size. Besides, eye gnats have yellow or orange-brown legs.

The adult females feed on eye secretions, sweat and wounds. In this feeding process, they could be a disease-causing vector, causing health issues like conjunctivitis, yaws, and the Brazilian purpuric fever which could be fatal.

Eye gnats do not bite, instead suck from the source. Thus, eye gnats cannot cause wounds like other. The average lifespan of these gnats is around four weeks.

Fungus gnats are similar in size to other gnats mostly ranging around 1/16 to ⅛ inch long. These gnats have dark-colored bodies with slender legs and long antennae.

The fungus larvae feed on fungi and organic matter in soil. The larvae pupate and then turn into adults. Hence, you find the adults emerge from indoor houseplants or mostly near organic matter. Fungus gnat infestation could lead to root damage and even plant death. In that respect, these gnats are a nuisance to humans by not posing any real threat. The lifespan of fungus gnats extends upto two weeks.

our roundup of the five gnats that you need to be wary of.

The above gnat types are the ones that you are most likely to find in your surroundings which either pose a risk to your health or your pets’ and livestock.

Each of these gnats have their living and reproducing conditions different from each other. Knowing these factors will help you distinguish one gnat type from the other and adopt necessary methods to get rid of these gnats.

If you have any queries, feel free to leave them in the comments below.