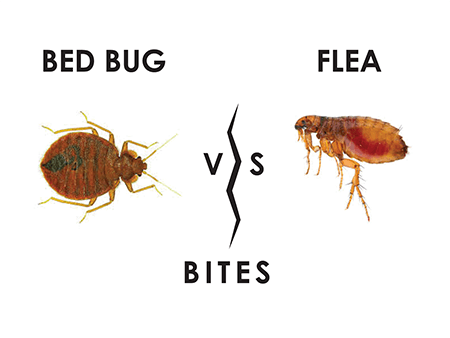 Fleas and bed bugs are blood sucking parasitic insects which rely on their hosts for survival. It is very difficult to distinguish whether the bites you are experiencing are from a flea or a bed bug.  This is because the occurrence of bites on human being are often be assumed to be by the bedbugs since fleas or commonly found within pets. However, there are a few characteristics which you could consider to help you identify the type of insect that bit you.

Difference Between Fleas And Bed Bugs

Although Flea Bites and Bed Bug bites are almost same. It is easy to identify them. But before identifying which kind of bug bit you, you need to know about these bugs.

Fleas are often found in pets, however, they can also attack human beings. There are three types of fleas which are common among residences and this are the dog flea, cat flea and the human flea. Like earlier said, they’re blood sucking parasites and thus rely on blood meals from the hosts so that they can survive. They are known to feed numerous times in a day and for long hours. If allowed to, they can inhabit the body of the host.

Bedbugs are also blood sucking parasites and depend on the blood of humans for survival too. However, the bed bugs as the name indicates, are found within sleeping areas, bed frames, mattresses and bedding. How they come to infest your living place is a wander but the most common way is through transportation from one place they’ve infested to a non-infested place. The feeding program of bed bugs is much less than the fleas and often feed seven to ten days. Since they’re not comfortable living on a humans body due to their temperatures, they depart the human’s body and go to hide in cracks as crevices where the temperatures are lower. For more information, see Life Cycle of a Bed Bug

It will be hard to differentiate between flea bite and bed bug bites at first look. Especially when you are seeing them for the first time. But once you know the clues about these bites. You will know which bug bit you at first glance.

Bed bug bites are commonly found around the neck, hands, face and arms or legs which are often exposed during sleeping time.The swelling found on the affected area appear hard, flat, inflamed and reddish in color and with continuous itching can become bigger.

When you find bites on your body, this means your place of living has been infested with tiny biting creatures. It is therefore advisable to inspect around your house in search of them. If you have children or pets around the house, you should also check whether they’re experiencing the bites as well. This will help you control the infestation of either the fleas or bed bugs and treat their bites accordingly after identifying which of the two bit you and your family members.