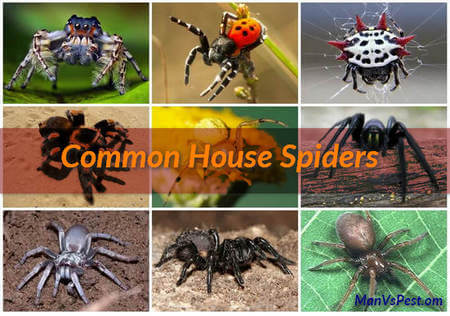 One day, a woman sent loud screams from her house. As neighbors, we thought robbers had attacked or maybe there was a domestic problem. However, when we rushed to respond to the alarm, she told us that she had seen a spider in her kitchen. We laughed but we did not know that it was a different type of spider because we did not know about the common house spiders.

Therefore, the spiders that live in and around the houses are of many types. Most of them are web-building spiders. They can survive easily outside and inside the house. This article describes them as follows:

The cobweb spider normally has a body shape that resembles figure 8 and you can also call it the comb-footed spider. They are the most common spiders in the house. In terms of color, they are brownish or grayish. They construct very familiar but irregular tangled webs that give them their name. It builds in very quiet places in the buildings especially where there are wood or stone piles. You may also find it building in areas like basements and crawl places.

An example is the famous reddish brown American house spider. They most live in closets, under furniture, and angles of window frames. Sometimes you will find them in garages and sheds. One funny thing about American house spiders is that they have poor vision. Therefore, when you threaten them, they feign death.

The second common house spiders are the cellar spiders. They are long bodied spiders. You mostly find in dark places such as basements, cellars and crawl places. They also build webs on the ceiling boards or floor. They mostly target the corners. Some of the features they bear are:

The third category of house spider is the Orb weaver spiders. These types of spiders mostly build in landscapes, fields and flower gardens. You will rarely find them in the house. They are large and posses very swollen abdomens which is why you may find some of them as oddly shaped. Despite all that, they are never dangerous like the cellar and cobweb spiders. When forming their webs, they concentrate on webs with concentric circles and radiating lines.

The garden spider is also called the Argiope. It is black and yellow in color. It mostly familiar to many people as it goes indoors most of the times. It is normally 1-inch long.

The barn spider is 4/5 inch long. It is also yellow and black in color.

On the other hand, the marbled orb spider is a very attractive spider because it has a pleasant orange color. Sometimes the color varies from orange to pale yellow and white.

The funnel weaver spiders are known for building very complicated webs which are usually flat and horizontal. On one side is normally a small funnel-like retreat. They are moderate in size or ¾ inch long. They are also reddish brown in color with stripes near the head and a pattern in the abdomen. In case you have ever come across them, you will realize they build on the ground, window wells, foundations, low suburbs and steps.

Several spiders can be classified as funnel-web spiders. An example is the barn funnel weaver. This spider has a pair of dark stripes behind the head. It builds webs in corners and closets in the house. Another example is the grass spider. Like its name, it builds horizontally in short grass of lawns. They have light and dark colored stripes behind their heads.

The most common black widow spiders are the female spiders which are shinny black. You will see red spots when you check their abdomen. Males on the other hand are dark grey or brown in color. In case you meet one with an hourglass shape, it is either yellow or white in color. Such spiders live on stonewalls, outdoor furniture and railings. Female Black Widow Spider’s venom is more potent than Male Spiders.

Therefore, you can begin to be keen every day on the kind of spiders that walk around your home. Some people fear them while others do not. However, just know that some are dangerous.